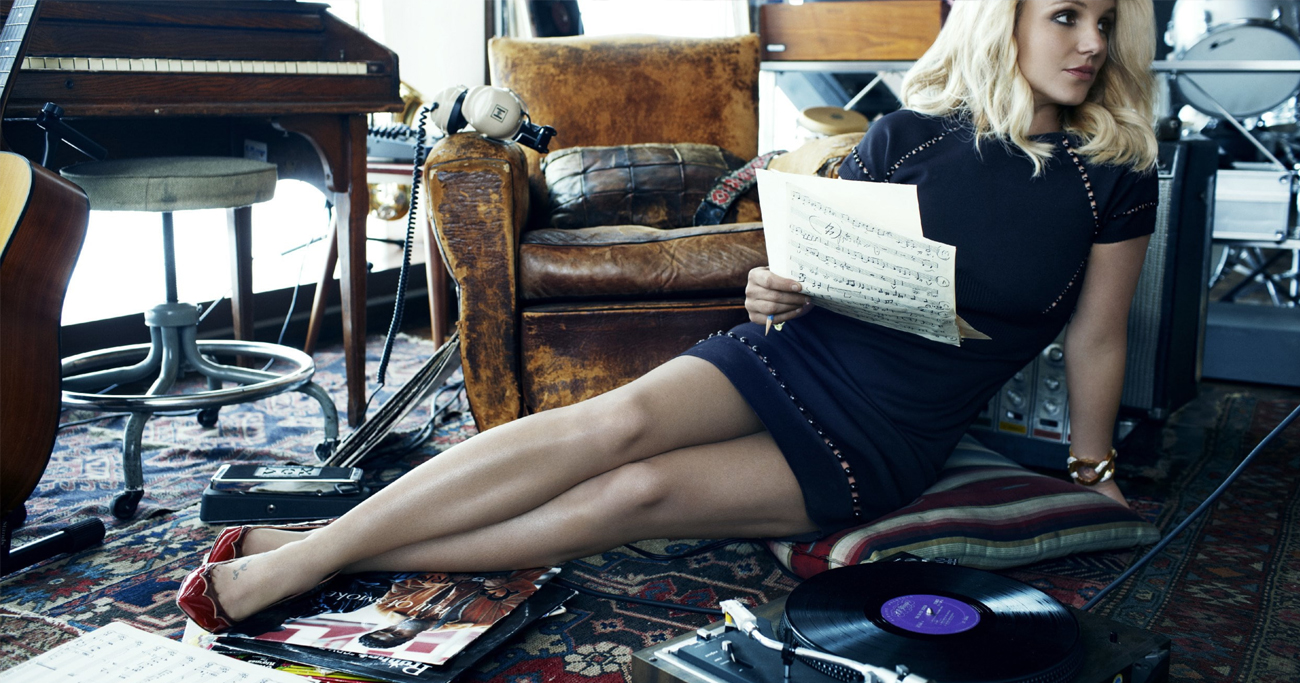 I recently received my latest issue of Elle Magazine for October

. The cover features a lovely photo of Britney Spears in a tight electric blue dress and big sunglasses. Britney is highlighted in the magazine in an article and photo spread, showcasing fashion, her fiancée, and her new position as a judge on television’s The X-Factor

. Having been chosen by Simon Cowelll for the job, the role allows her to make a lot of money while staying close to home to be with her boys. Britney has had her ups and downs in her career, and at 30 years old, is proving again that she has the staying power of a true star.

In Elle’s photographs of Britney, there is one that spans 2 pages in which she is reclining on the floor next to a turntable with several albums strewn about and sheet music in her hands. Under her legs rests a small stack of records, the one on the very top caught my eye. Peering out from the cover is friend and client, Allen Anthony. The album is Christión’s single “Full of Smoke” which features Allen Anthony and Kenni Ski on the cover. Christión was a duo featuring Kenni Ski and Allen Anthony, the first R&B act to be signed to Jay-Z’s Roc-A-Fella Records. They released their single “Full of Smoke” on Roc-A-Fella in 1996, reaching #53 on the Hot 100 and #15 on the R&B charts.

Now coming full circle, one of the song’s singers, Allen Anthony, is about to make his comeback. Reinvention is the word that comes to mind. As a long-time customer of GINGALLEY, and a friend to Chris and I, we have been excitedly working behind the scenes on his website and promotional materials for his new record label, Blue Zane Music, and for his soon-to-be-released brand new album.

That song, “Full of Smoke” has staying power. It was featured as an introduction in a music video created in 2011 by Snoop Dogg called “The Way Life Used To Be” as on his album Doggumentary. In the video, it shows Snoop Dogg listening to “Full of Smoke” and reminiscing. (see below)

Allen’s new release will be a compilation that showcases what can be considered as the most personal and classic songs Allen Anthony has written in his career. It is Allen’s goal is to leave this world knowing he left his own personal mark.

While we have been working on Allen Anthony’s website, CD cover art, press releases, graphics, and a multitude of other marketing endeavors; it was a pleasant surprise to see Allen’s visage peeking out from under Britney Spears leg in my copy of Elle.

Stay tuned for more news on Allen Anthony’s newest releases and projects. He too has been reinventing himself and possesses that which all singing stars aim to achieve: Staying Power.